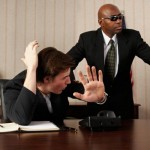 I was called personally by the “IRS” several weeks ago. The IRS folks left a message for me saying that the IRS was putting a lien on my property and issuing an arrest warrant for me, because I owed back taxes that had never been resolved. I was to immediately call and talk to an agent. I noted that the phone code read Washington DC.

Fast forward three weeks. The sheriff is outside now with the warrant, and I am going to jail. NO NO NO. It’s all a SCAM.

This is serious though. In the last two days we have had three students call on this issue, and Ben Rucker, the former special auditor for the IRS that works with us now, had a neighbor come running over to his house this morning.

The neighbor was panicked because the IRS was on the phone and he knew he owed them money. They said they were going to sue him or he could settle the claim. Which did he want? Settle or go to court? He ran to get Ben to talk to them. Ben recognized the number as the IRS main number in Washington, DC. After a short conversation with them, Ben was told that actually the agent on the phone couldn’t authorize settlement, but a supervisor would call them within ten minutes.

After 5 or 6 minutes, the “IRS” called back. Ben knew it was a scam, but was playing along. When the return phone call for the supervisor came in, the phone ID was the IRS main 800 number (800-829-1040), which Ben recognized. The supervisor said that the money would have to be wired within 30 minutes if the claim was to be settled. Ben said it would take 10 minutes to get to the bank and asked if they wanted to be called back. The supervisor said he would actually hold on the phone until they got back.

While the scammer was holding, Ben called the IRS fraud division and was able to reach one of his friends there. Ben was told that unless the scammer was there in person, there was nothing the IRS could do. The phone calls originated from overseas (Eastern Block or China), but somehow they were able to program the caller ID to show the IRS phone number.

All of this is really scary to someone who actually owes money to the IRS or hasn’t filed taxes. One of our students is a small businessman who has had problems with the IRS. He wired these guys $27,000. That’s now part of some guy’s Ferrari in Russia or China.

This is a multi-million dollar IRS scam. In real life, the IRS may call you and ask for some evidence (a receipt, 1099, or something else). The IRS doesn’t arrest people – not yet anyway. The IRS will never ask you over the phone to send money to settle a case. Almost all IRS communication is through the mail.

If there is a slim chance the call might be legit and you want to check it out, just tell the guy to send it to you in the mail, and you can respond. They already have your address. There is not any type of a sixty second deadline with the IRS, and they never sue people. They file levies against your property.

If the “IRS” is calling asking for money, just tell the “IRS” where to go. It will make your day!

I have never asked you to send on my information before, but this scam is going around – big time, and these guys are very convincing. These guys are really good. They may have some of your personal information. The numbers on your caller ID are showing the IRS. Yes, you can google the numbers, and they will be the real IRS numbers, but it is all a scam. Don’t trust what you see on your phone. Don’t lose any money. You pay enough to the IRS through the correct means. Please share a link to this blog with your friends and family. We don’t want anyone else falling for the trap.

Are You Getting Our Tips on Email?

These secret but fully legal loopholes will help you cut your taxes.

Use the Law to Make Money and Protect Your Assets. This DVD Presentation will show you proven strategies how to Make more money by keeping the money you make.

Get Your Free DVD →